Due to this event being reschedule to tonight from a previous date Joe Graham of The New England Music Awards and Amy Nachbar ofExaminer.com are unable to join our industry panel. They will be on the panel at our next event. In their place we have:

John Laurenti of Boston’s Classic Rock, 100.7 WZLX will be moderating.

The Studio Cellar podcast will be set up on location for interviews again. They’ll be on the backside of the bar. Ask for Jim Schultz, Tom Ribeiro, or Jax Adele.

Also, Scarpetti of 94HJY-The Home of Rock and Roll (host of Soundcheckand The Metal Zone) and DAve Crespo of Boston’s WEMF Radio and co-host of Bay State Rock on WAAF are unable to join us due to prior commitments. They have both asked that Midday Records collect CD’s from the artists in attendance tonight for airtime consideration on their programs. So if you’re in a band make sure you turn in two separate CDs with your material to me. I will be hand delivering these to both stations.

This will be the first time Scarpetti has not been available for this event. We are honored that both he and Crespo are still providing the same opportunities for the artists that attend as if they were here. Scarpetti has played MANY of the artists that turn in material at this event. Crespo also gives artists a spin and helps promote when the bands have upcoming shows in the Boston area. Again, this is a great opportunity to get these stations, and others, your material so don’t miss out on this tonight.

I’d also like to remind bands to bring plenty of CDs to give to other stations, promoters, and the music journalists tonight. And don’t forget to turn one in to our DJ by 8:00 the latest if you want us to spin your songs at tonight’s event.

Our sponsor MusicTown (Seeking Local Musicians) and Circle-Jam Productions will still be setting up gear in the back room for impromptu jam sessions. On our main stage we have:

Tracy and Shawn of VulGarrity
Mardi Garcia of Mardi and The Astral Seekers
Jenn Lombari Jenn-Kitten of Lucky United
Mike Baker of Sgt. Baker & The Clones

And closing out the night will be a full live set by The Skinny Millionaires.

We start PROMPTLY at 7:00 at Platforms in Providence, RI (industry reps should be there by 6:00 to set up). ALL AGES / ALL GENRES / FREE

The Midday Social goes down TONIGHT!

If you’re in a band or a musician in the New England area get down to Platforms at 165 Poe Street Providence, RI for the areas fastest growing music related networking event! The areas top radio stations, promoters and venues all in one room for a night networking and it’s FREE!

Just look at the list of reps in this event page!

Check out our interviews with the 6 artists in the upcoming “Perform at The Midday Social” competition for a “Get to Know the Artists” segment. 6 questions for the 6 bands; Echoes of Petra, The October Accord, Downcity Armory, Weld Square, Escape Pod, & Most Dangerous Men Alive.

Jump To The Interviews:
Echoes of Petra
The October Accord
Downcity Armory
Weld Square
Escape Pod
Most Dangerous Men Alive 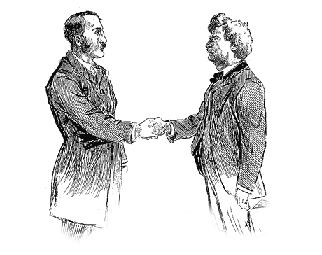 You can catch all these bands this Friday, January 24 at The Met in Pawtucket, RI. (Doors at 7:00. All ages. 10 bucks. Click here for the event page.) They’ll be competing for our judges: Mike Delehanty, talent buyer for Lupo’s and The Met; Marc Clarkin, music journalist for Motif Magazine, and Brian Manfredi, Senior Account Executive at 95.5 WBRU for a chance to perform at the next Midday Social. The Midday Social is one of New England’s fastest growing music related networking events. Held quarterly by Midday Records at Platforms in Providence, RI, we fill the room with the area’s top promoters, venues, radio stations, publication, etc. for a night of networking. The event is always free and open to all genres. For more details click here.

Midday Records sits down with Jodi and Jeff of Echoes of Petra for our “Get to Know the Artists” feature. Echoes of Petra will be competing on Friday, January 24 at The Met in Pawtucket, RI for a chance to perform at the next Midday Social.

Midday Records: Let’s start off with the basics. Can you tell us a little about the band and the story behind your name, “Echoes Of Petra“? 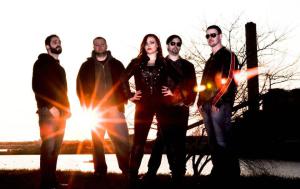 Jodi: Jeff can probably explain that one best but here is a little history straight out of wikipedia; Petra is a historical and archaeological city in the southern Jordanian governorate of Ma’an, that is famous for its rock-cut architecture and water conduit system.

Jeff: Petra was a city circa 1500bc and the entire civilization was lost. No reason has been found whether they abandoned the city or it perished. “Echoes of Petra” is homage to that civilization lost….Echoed in time.

Jodi: Our former guitarist, Nik Rooney, came up with the concept. We all loved it and just went for it!

MDR: You’ve recently opened for “All That Remains” at Lupo’s. How was that experience and how has shows like that affected the band?

Jodi: I’m not sure about anyone else but I’m pretty sure they all feel the same; it was a huge accomplishment for us and we were just happy to have the opportunity to play such a historical venue. I know I’ve been to a ton of shows at Lupo’s (even the old Lupo’s) and it has always been the best size club to see a band in the Providence area. Not to say there aren’t other great clubs out there but the capacity, reputation, and location is what makes it so special to me. Naturally, I was nervous. But the days leading up to the show I had far more butterflies than I did the day of the show. I said to myself “Jodi…..this is it…. game time. Time to sing your heart out with your friends and enjoy every moment!” That’s what I did. After our set I had an entirely different mind set. Let’s just say I had a few too many celebratory cocktails!

MDR: You have members that have been in previous projects with styles ranging from alternative to metal, how did you decided on your current sound and what artists influence the band? 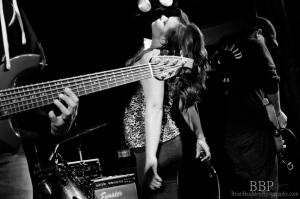 Jodi: Well, Jeff and I decided to start a project and he was coming up with some different ideas. Due to the fact we’ve worked together in the past he was aware of my interests (which are pretty much a mish-mosh of different styles) and knowing the type of vocalist I was, he had a jump-start. I loved a lot of his ideas and it went from there. Gradually, we added members 3,4 & 5 and before we knew it we had an EP. The guys really helped me come into my own with that first EP. They were patient while I tried figuring out “my way” when it came to writing. They had all been such seasoned musicians in the scene and although I was a studio musician and huge local music supporter, this was a completely different animal. I love those guys! They believed in me when I didn’t believe in myself and inspired me to push through the fear……. wow, that sounded like either a Nike commercial or maybe an idea for my next song!?

MDR: Which of your songs do you enjoy playing live the most?

Jodi: Personally, I love to play “A Vacant Tide”, “Fault Lines”, and the occasional cover song. For me, “A Vacant Tide” is one of those songs I can completely lose myself in with all the emotion and meaning behind the song. “Fault Lines” is another favorite of mine because it has a little bit of everything that I love about music; a groovy beat, soft vocals, inspirational lyrics, loud vocals, climax, emotion and big ending. It allows me to show my low vulnerable tone as well as my high and emotional notes. When the song ends I’m usually feeling an adrenalin rush due to the power of the instruments and me being able to express myself along with this amazing power. The only downfall is that we play it last a lot of the time and I’m standing here (or on my knees) wanting more!

MDR: You’ll be competing for a chance to perform at The Midday Social, have you attended a Midday Social in the past or worked with Midday Records prior to this event? If so, what was the experience like for you?

Jeff: We have attended all 3 of the Midday Socials. We loved the first event and even got to play the 2nd time acoustically. Prior to that we had been on one of Midday Records compilations. We have been working with Midday for quite awhile and appreciate all they have done to motivate and stimulate the scene!

MDR: What can we expect to see in this upcoming year from the band?

Jeff: Our goals are simple: Finish our new record. Play some great shows. And have fun while doing it.