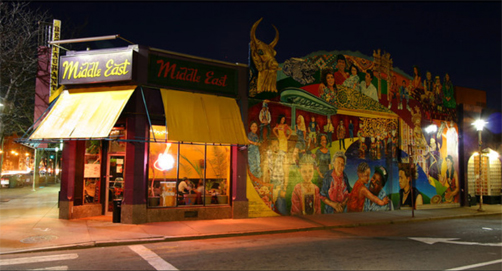 Show number three brought me to The Middle East Upstairs. This venue and I have a rough relationship with one another. In 2008, I had the worst gig experience of my life there (and I’m a guy who has played a gig next to an active carousel AND had an oxy-head take a REALLY SLOOOOOW SWING at me during a song) and I STILL consider one of my MidEast UP gigs the worst of my life. I have since gone back and had better experiences there, but I knew going in that it would be hard to be impartial. So there’s that.

All that being said, I was actually pretty excited to catch this show because my friend Joel’s band was playing and he and I have been friends for far too long for me not have seen his band. It was up in the air right up until the moment I showed whether or not I could make it. My girlfriend was pretty under-the-weather and I initially gave up the gun on going to the show. But when she went to bed, I realized that my go/no-go deliberation is part of what this blog can be. Let’s be honest – most of us go to a show because we want to see the one band we have a connection to, and this was my case. I knew Joel’s band wasn’t opening, so I figured not showing up not-on-time would actually be a more realistic representation of the true ‘fan experience’ and so, off I went. 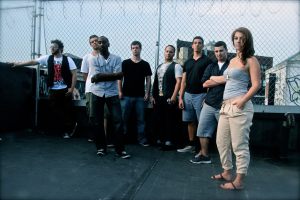 To enter the venue, you must enter the door of The Middle East restaurant, (not The Corner, not ZuZu) and head directly for the back. I walked up to the door at 9:20 pm to a show that was advertised to start at 8pm only to find out I’d missed exactly 8 minutes of music (so there’s that). The band, Mad Satta, was outstanding, something I point out only because I want it made clear that my showing up late wasn’t a slight to them, they’re worth your buck and I’ll leave it at that. (not a band-review blog, will probably bring that up all 52 times). That buck was more accurately 10 bucks. Fairly standard cover charge.

First thing worth noticing, there were about 60 people in the room when I walked in. Not bad for a Thursday night. The crowd was intensely diverse, ranging in age from 22 to 62. The first thing I noticed was that most of them opted to keep their coats on (it was a little cold). As I cut my way across the room, I also noticed that that room SUCKS for moving around – the space in front of the stage is bookended on both sides by walls with ‘middle-eastern’ doorways which have the two bars that the room contains. So that means, most people gather between the two walls and aren’t paying attention to anything other than the show. That is awesome theoretically and a nightmare logistically.

I, in fairly short order, located the back bar and found Chris Keene, lead singer of Mean Creek (from my first show) tending it. I grabbed a Jack on the rocks and seven bucks later, found my friend standing guard by his merch stand. From outside the ‘stage area’ we discussed the merits of merch stands, during which I noticed something else – The Middle East Downstairs has improved its sound system to the point where he and I could actually talk. That’s a pretty big and non-standard deal.

When the first band was over, I went outside to the Middle East Restaurant which, had a closed-circuit tv into the venue so I could enjoy the quiet and diminished crowd before going back in. While I was out there, I became cognizant of my own fatigue and so I asked the bartender for a Red Bull. He tried 4 (no lie) 4 different ways to convince me not to drink it or to go elsewhere for it. For the first three, I appreciated the sentiment – Red Bull is gross and tastes like burnt gummy bears, but I’m a caffeine addict and I know when I’m jonesing – not proud of it. After the fourth attempt, I was more perturbed – it’s behind the bar, I’m offering you money, fork it the fuck over. 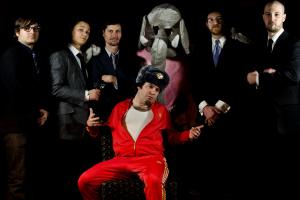 Once you’ve had a Red Bull you’ve pretty much told your mouth you give no shits about its opinion, so I ordered a 4-dollar Bud Heavy Tallboy and, seeing from the tv above the bar that they were about ready – I went in to catch the band I came to see. Again, not offering a review here, but it’s worth pointing out that The Somerville Symphony Orkestar were fantastic, and my personal connection to the group made me enjoy it even more. For the uninitiated, you know how excited you were when you were there to watch your friend make the big play in their sporting event? Imagine that for 45-straight minutes. SSO KILLED it, 45 minutes of goals/interceptions/tackles/saves..whatever. I had a blast. Now…worth noting that I’ve gone to see friend’s bands that I’ve hated, too and it’s pretty much like watching them drop the big pass for 45 straight minutes, so you take your chances.

I noticed when the crowd turned over, that the total dipped form 60 to 45 and promptly rose back to 70. My friend in SSO informed me that his brother was a member of the New York-based headliner (The Stepkids) and all of a sudden the demographics in the room started to make sense. When siblings collaborate, the family comes out of the woodwork and infiltrates clubs they’d NEVER step foot in otherwise. So parents, cousins, grandparents all of a sudden will be mixed in amongst the populace, something I think is extremely cool.

After a very similar intermission between the 2nd and 3rd band as had been between the 1st and 2nd, I resumed my spot in the room. What’s funny, is that I had initially thought I needed to watch the entire show to do this accurately, but I actually think that may not be the case. I watched 6 of the headliner’s songs, but just didn’t climb on board – I got that they were good – they just weren’t my kind of good. I made the pledge to check out the show and, that’s what I did.

I think that’s the number one reason I don’t want this to be a band review blog, who the fuck cares what I think about a band? Those dudes could PLAY. I just wouldn’t seek out their brand of music in my day-to-day. Now I know that and THAT is the point – I came, I heard, I know.

So the end result was that I had a blast and woke up with less of a hangover Friday morning. The Middle East sound was great, logistics were shit and the prices were so-so. I’ll go back. We’re not in a fight anymore.